In the weeks leading up to its premiere, this R-rated origin story provoked feelings of alarm, caution, and fear as many were worried for the potential of copycat crimes, with many referencing the man who conducted a mass shooting at the 2012 screening of The Dark Knight Rises in Aurora, Colorado.

The theater where the shooting occurred chose to not show the film, and family members of the Aurora shooting victims wrote letters urging the studio to take their responsibility for keeping viewers safe seriously. Sandy Phillips, whose 24-year-old daughter was killed in the shooting, called Joker a “slap in the face.” She went on further to say, “My worry is that one person who may be out there—and who knows if it is just one—who is on the edge, who is wanting to be a mass shooter, may be encouraged by this movie. And that terrifies me.”

Twitter exploded with pre-panic over the imagined glorification of mass-shooters and sympathy for disenfranchised white men. News stations reported on the presence of cop cars in parking lots of various movie theaters for premiere night. An Army base in Oklahoma warned commanders to be alert to possible violence at theaters, and several theater chains banned ticketholders from wearing costumes or masks.

Speaking at a press conference in Manhattan, then-New York police commissioner Ray Kelly said 24-year-old James Holmes, who walked into a movie theater and opened fire about 20 minutes into the movie, injuring 58 and killing 12, had actually referred to himself as the Joker. “He had his hair painted red, he said he was ‘the Joker,’ obviously the ‘enemy’ of Batman.” However, George Brauchler, the Colorado district attorney who prosecuted Holmes, said that never happened.

For years, Brauchler and other Colorado officials have attempted to clarify that Holmes never referred to himself as the Joker. Yet the story has persisted, Brauchler believes because it fits the narrative so cleanly. “Of course, the crazy-hair-colored guy who shot up the Batman premiere thought he was the Joker, of course!” he added. “Yet it has no connection to reality.”

In a 2015 interview with the Denver Post, when asked why he never addressed the rumor sooner, Brauchler said that his team did not push back on the rumor during the trial because it was focused on getting the death penalty for Holmes (who was ultimately given 12 life sentences, one for each person he killed, plus 3,318 years). Pressing the issue on whether Holmes fashioned himself a comic book villain didn’t seem entirely relevant.

However, there have been many attempts to set the record straight regarding Holmes’s dyed orange-red hair, which was considered a potential sign of his Joker fandom (even though the Joker’s hair is dyed green). Dr. William Reid, the psychiatrist who interviewed Holmes for several hours during the trial and later published the book A Dark Night In Aurora, said the shooter had dyed his hair prior to the shooting after being inspired by a friend who had blue hair.

“When I asked Holmes about him dying his hair red, he said, ‘Well, my friend dyed his blue, so I said I’d dye mine too and I just picked red,’” Reid said, noting that it was a seemingly random choice. He then asked Holmes outright if he had been inspired by the Joker at all. Reid said, “[Holmes] said that the first time he heard of the Joker idea was [from] somebody in another cell. He heard calling back and forth, ‘Hey, you’re the Joker,’ or something like that.”

Reid said that in his estimation, Holmes was not “in great mental condition” and searches of his apartment showed no particular interest in comics besides one Batman mask. Brauchler’s belief is that Holmes chose the screening of The Dark Knight Rises simply because it was popular: “He was looking for a blockbuster, right? Had this been Jurassic World, he’d have been there. Had it been Avengers: Endgame, he’d have been there.” Reid agrees, saying, “he picked that movie simply because it was guaranteed to be full.”

Brauchler noted, “Perception is reality. It doesn’t matter whether he really did it because of the Joker when you and I know he didn’t, it’s how people perceive it.” Reid diagnosed Holmes with schizotypal personality (see Abnormal Psychology of Leonarda), while the court-appointed psychiatrist, Jeffrey L. Metzner diagnosed him with schizoaffective disorder. A severe form of schizophrenia which involves a combination of schizophrenia symptoms, such as hallucinations or delusions, and mood disorder symptoms, like depression or mania. 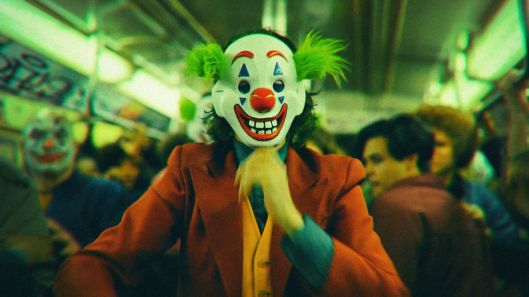 In a Forbes article regarding the pre-panic of Joker, senior contributor Dani Di Placido refers to the early criticisms as fear-mongering. He states, “Humanizing the inhuman isn’t something new or shameful. Being offered a glimpse into the mind of a twisted protagonist doesn’t equal an endorsement, and those who unironically admire disturbed characters like the Joker, are completely missing the point of their stories.”

Although the movie, which depicts a man’s descent into madness while struggling with a variety of mental illnesses, including PTSD and Pseudobulbar Affect or PBA, has gotten mixed reviews. A Facebook post, reposting a psychiatrist’s take on the movie (which has been shared over 10,000 times in the past week) has suggested that it is one of the most profound films about mental health.

Additionally, Adrian Raine, a neurocriminologist who’s a pioneer in researching the minds of violent criminals, having been the first person to use brain imaging to study murderers, has said the movie stunned him with a surprisingly accurate prediction of the kind of background and circumstances which, when combined together, make a murderer.

Raine believes the script authentically traces the way a man could be driven to deeply troubling acts of violence by a combination of genetics, childhood trauma, untreated mental illness, and societal provocation. And though Raine can’t pronounce Joaquin Phoenix’s name, he was sure Phoenix would be in the Oscar race as he summoned the odd behavior, appearance and social tics exhibited by those suffering from certain personality disorders. Raine has even gone as far as to say, that he’s considering using the movie as an educational tool for a forthcoming course at the University of Pennsylvania about the making of the murderer – citing how even the Joker’s adoption could’ve attributed to his violence. He was quick to add though, that “the link between mental health problems and violence is, of course, controversial” – like the movie itself is proving to be. “We don’t want to stigmatize mentally ill people as being dangerous people. But we do know that mental illness is a significant predisposition to violence, which we have to recognize so that people can be treated.”

0 comments on “Perceptions Around the ‘Joker’ Movie”