With the focus of this month being on awareness, I believe it’s important to talk about pop culture’s influence on the public’s awareness on various mental health conditions. Film and television provide a look into the lives of those who are different than us and can help change perceptions on what mental health looks like. Of course, this can come with its good and its bad, but I’m choosing to focus on the good.

The film, Us, only came out two weeks ago and I’m basically obsessed with all of the multiple ways you can interpret the movie. From its symbolism to its portrayal of a family of color, there’s plenty of messages to walk away with. If you have not seen the movie yet, stop here, because a whole lot of spoilers are approaching. Instead, enjoy my little love fest to Lupita (who acted her ass off):

Throughout Us, Jordan Peele plays on the idea of duality, evidenced in the overall theme of the movie. One could interpret Us as a story of a doppelganger trying to get back what’s hers, while another could analyze the symbolism within the movie and see multiple metaphors on society. Commentary on race and themes regarding class, capitalism, and gender are evident throughout; but, in my opinion, the movie’s central metaphor is on mental illness and the lasting effects of trauma. To explain my point, I need to begin with the end of the film.

The movie opens with a young Adelaide Wilson’s encounter with an evil doppelganger while visiting a beach amusement park. Years later, as an adult, Adelaide returns to the same beach, with her husband and two children on a family vacation. That night, chaos ensues as they are confronted with duplicates of themselves. The movie explains how the duplicates came to be and the lives they endured due to their existence, ending with a psychological twist meant to leave the audience with many open questions.

One of the questions, I was constantly asking myself, while viewing the film, was what is the meaning behind the movie’s multiple references to ‘Hands Across America.’ Now I am a proud 90’s baby, so I was unaware of the 1986 activist campaign, where approximately 6.5 million people joined hands across the country to raise money for the homeless. The idea behind the campaign was literally for people to join hands across America, from coast to coast; but due to the mountain terrains and deserts within the nation, this obviously wasn’t a plausible plan. Cut to the last scene of the movie showing the duplicates, also known as ‘the tethered’, (specifically) standing across the land and over mountains linked hand and hand. This scene seems to be a direct response to the campaign and can be interpreted as Peele making the statement that seemingly disadvantaged individuals can rise to the occasion when given the opportunity.

Furthermore, there are parallels between the tethered and America’s homeless population, as the assertion is made that the duplicates emerged from tunnels below the ground. This seems to illustrate that Peele’s inspiration may have been the ‘Mole People’ (homeless people that live under large cities in abandoned subway, railroad, flood, sewage tunnels and heating shafts), making the ‘Hands Across America’ theme more prominent. With this knowledge (or perception) on the film, I saw Us again for a second time. As the movie opened with text about the large quantities of abandoned tunnels found throughout the United States, I began thinking that maybe Peele’s metaphor goes even deeper and broader. 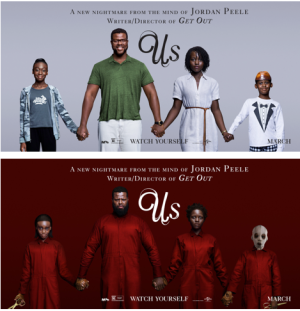 Each character in the film, no matter their race or gender, has a duplicate. Each duplicate exhibits aspects of the person’s innate personality, fears and anxieties, almost mirroring the seemingly ‘negative’ aspects found in each person. Dealing with these manifestations of inner demons are experiences anyone can relate to, but the duplicates’ unresolved trauma and lack of resources speak to a larger issue – mental health.

Because the main characters are black (and are depicted in a way that is very different than mainstream media… meaning they are well-off and educated), it could be a metaphor for mental health within the African American community, but I would like to make the point for mental health, as a whole.

The first scene that portrays a mental health issue is when Adelaide explains to her husband, Gabe, that since returning to the beach, she’s been feeling as though there was a black cloud over her and as if ‘she wasn’t herself’. She then describes her first encounter with her evil doppelganger when she was a child and the fear she has felt since. What’s so noteworthy about this scene is his reaction is one of dismissal (he adjusts himself seductively on the bed and remarks that though she felt like she wasn’t herself, she sure ‘looked like herself’).

When she explained that the doppelganger looked like her, his response was it was your reflection. When Adelaide stated she was scared of her double, Gabe said well if she looks like you, I can take her because I’m pretty sure I could take you.

This interaction is very reflective of actual conversations regarding mental health. A child tells an older family member that they’re experiencing depressive symptoms and are scolded, ‘You’re young. What do you have to be depressed about?’ A friend can’t get out of bed and is told by her squad to ‘stop feeling sorry for yourself and come get drinks with us. That will cheer you up!’ Instances like these, minimizes a person’s struggle and increases feelings of guilt. Additionally, they are the cause for why many feel as though they can’t come forward to others about their mental illness.

Peele carries the narrative regarding stigma into the next scene, as the family’s doppelgangers are introduced. Red (Adelaide’s double) depicts the parallels between the two groups’ lives. Her strained voice can be seen as a metaphor for the strain individuals with mental illness experience when speaking out about their diagnosis.

More directly, this scene effectively demonstrates the everlasting effects of trauma. As Red tells her story, the Wilsons and the audience are moved by her life. You begin to understand her struggle and the disadvantages she experienced; as she details how Adelaide had the means to deal with her trauma, while Red had to go through it all alone. This commentary can speak to how trauma impacts a person with money vs. a person without it.

Red’s trauma is what labels her as the evil party (even before the doppelgangers actually try to hurt the Wilsons); but Peele made the connection, reminding us that even though someone had differing life events, we’re not different. [Evidenced by Red’s response of ‘Americans’ when Adelaide asked who they were. An idea that was explored more during Red’s second monologue regarding how even though they lived underground, they were human too – speaking on how society can have the habit of looking down on those whose life is different than theirs.]

Most telling are the actual doppelgangers, specifically when we see them at the school in the tunnel – which to me, definitely looks like an old psychiatric hospital. I believe this is where the majority of the similarities between the tethered and individuals with mental illness becomes more concrete. For instance:

Walking around in the background of the hallway/fair scene is a single sailor. He’s alone at the fair, walking aimlessly, looking at things and is seen shuffling about in the hallway. There seems to be no apparent reason for why he’s there, in uniform, but Peele’s inclusion of him seems purposefully done. It feels as though his participation is a representation of the number of veterans that are homeless and are struggling with mental illness.

Adelaide’s father is holding a beer while he’s at the fair. At one point, he mentions how he wants to get another when his wife shoots him a disapproving look. His double (Red’s father) moves with the mannerisms of a drunk, evidenced by his swaying and delayed reaction time. Red’s mother almost looks like a textbook female junkie, walking by his side as he continues down the hall. This speaks on the portion of the homeless population that are struggling with addiction disorders.

The rest of the doppelgangers display symptoms of various disorders –

I believe that in order to make the metaphor about mental health, Peele used various ‘stereotypical’ symptoms of multiple disorders to effectively illustrate this point. Incidentally, most of the symptoms of the Tethered are similar to some of the symptoms associated with Autism Spectrum Disorders.

For instance, after learning that the real Adelaide is actually Red and vice versa, the symptoms young Adelaide displays begin to align with symptoms of the disorder. Such examples include her compulsion to line up her toys while her parents are meeting with the therapist and the therapist’s use of arts therapy to help Adelaide work through her communication issues – which is similar to treatment techniques used for kids on the spectrum.   There’s even a little glimpse of autism as it manifests in adults, with Adelaide’s remark to her friend, Kitty, about the fact that she is ‘not good at talking’. A slight hint to the movie’s ultimate twist but also a nod to the social deficits experienced by those on the spectrum, as they experience trouble with the back and forth of conversation.

Additionally, the overall motor function and communication deficits demonstrated by the doppelgangers are other examples of autistic-like symptoms. But I would argue that the main and best example would be the affect issues exhibited by the Tethered.

Affect shows the internal state of an individual’s emotions at any given time. Inappropriate affect is defined by expressing emotion and/or behavior that is not appropriate for the event or situation. History of mental illness, mood disorders and head trauma are just some of the triggers for the disorder. From my experience, within in the behavioral health field, I’ve observed the symptoms,  which can include expressing joy during times of sadness or having unprovoked outbursts of anger, in some of my clients on the autism spectrum. I’ve witnessed a child fall and scrape their knee, then laugh while explaining how much it hurts. Another child became extremely violent after the point on his pencil broke while he was practicing writing his name. These examples were perfectly replicated by the doppelgangers as, Kitty’s double laughs while her husband’s double is getting killed and Adelaide’s son’s double displays irrational anger when the son is unable to get his lighter to ignite.

More examples of the doppelganger’s affect issues are found in particularly every scene, as they laugh jovially as they kill, grimace (instead of smiling) when greeting someone and display an inability to express genuine emotion (seen most notably in Kitty’s double as we see her scream but don’t hear any noise as her husband is getting killed).

Jordan Peele has made a reputation of using media to provide social commentary on various aspects of American culture. Recently he has spoken on his intentions to provide opportunities of representation, already seen in his insistence on only hiring black people for lead roles in his movies. People with disabilities are another group of individuals that are lacking in representation, which makes Peele’s film even more important as it portrays a side of mental health that is different than the regular narrative (like the ‘innocent fool’ – think of Raymond in “Rain Man” or Forrest Gump), and provides authentic representation on the stigma associated with mental health.

“It really is one of the best greatest pieces of this story, feeling like we are in this time [where] a renaissance has happened and proven the myths about representation in the industry are false.” – Jordan Peele, 2019.

0 comments on “Jordan Peele’s ‘US’ – A Metaphor for Mental Health in America?”